Did you know that you can follow in Agatha Christie’s footsteps by stepping aboard the Steam Ship Sudan in Egypt?

The oldest steamboat still running on the Nile today. You really can take your very own Agatha Christie Nile Cruise!

The queen of crime herself stepped aboard the Steam Ship Sudan to sail down the Nile. She travelled throughout Egypt in 1937. This cruise, and the Old Cataract Hotel in Aswan, inspired her to write her famous novel ‘Death on the Nile’.

Decades later, it has been the star attraction and filming location for scenes in modern film and TV adaptations. Most famously, Death on the Nile in 2004 starring David Suchet 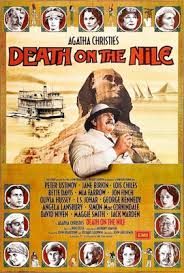 During my Nile cruise aboard the MS Mayfair from Aswan to Luxor, I spotted the SS Sudan pulling into Kom Ombo port. I instantly recognised it and was dying to take a look around. My tour guide, Eid, used to work on board the ship and knew it well.

He also knew the manager of the Steam Ship Sudan and managed to score me a free tour! A.K.A I got to snoop around the ship for a few hours. I was over the moon with excitement!

It felt surreal to wander around the filming location of a movie I have been watching for years. Here’s a tour of Agatha Christie’s Nile Cruise, the boat used in Death on the Nile.

The Steam Ship Sudan, or SS Sudan, is an old steamer Nile cruise ship that was built for King Fouad in 1885.

A few years before this, the legendary entrepreneur Thomas Cook acquires a permit for tourist Nile sailing. He then accepts eager tourists aboard his first Nile Cruise for Egyptian tourism in 1876. As well as Nile cruises, Cook also built the Old Winter Palace in Luxor and the Old Cataract in Aswan.

In 1911, he acquires the Steam Ship Sudan and Arabia to advertise faster cruise ships. These boats cut down the tour from Cairo to just 20 days and so more tourists were eager to step aboard.

By 1935, the Steam Ship had reached a golden age of tourism and in 1937, Agatha Christie steps onboard.

No one ever knows whether Agatha Christie intended to stay so long in Egypt. But, what we do know is that she remained here for most of that year. The SS Sudan and the Old Cataract were her muses for writing Death on the Nile.

In World War II, Egyptian tourism came to a halt. This also meant that the Steam Ship Sudan was abandoned and locked away for over 50 years.

In 2000, directors of Voyageurs du Monde bought the steamer and revived the SS Sudan to its former glory. It set sail once more in 2006 and has welcomed tourists on board ever since.

What films and shows have been filmed onboard the Steam Ship Sudan?

The famous ‘Karnak’ steamer which Agatha Christie wrote about in her novel, was based on the Steam Ship Sudan after her own cruise.

I always thought that the 1978 version of Death on the Nile was filmed onboard the Steam Ship Sudan. But, I later found out that four weeks of filming took place aboard the SS Memnon. This ship is still running as part of Seti Cruises, but only for private functions.

The SS Sudan at the time was still locked away. But, I’m sure if it was available they would have used it for the movie.

The 2004 version of Death on the Nile, starring David Suchet, was filmed on board this very ship.

There is also a new adaptation with Sir Kenneth Branagh due to be released soon and I wonder if the SS Sudan will be a filming location too!

Welcome aboard the Steam Ship Sudan

As soon as I waited on the dock at Luxor and saw the SS Sudan pull in, I felt butterflies. Seeing this ship in person and knowing I was going to come aboard was a strange feeling.

The fact that Agatha Christie would have been on this boat made me have a serious fan girl moment!

I walked down the steps and the gangplank was lifted, allowing me to come aboard and I was shown to the bar. It was a hot day in Luxor, so I was thankful for the cooling temperature of the drawing-room.

No sooner had I sat down, a kind waiter in full livery and tarboush, served me a refreshing glass of hibiscus tea.

I could see the residents reading from the ship library,  which had copious copies of Death on the Nile to choose. Some of the patrons were playing board games. It was very relaxing.

The lounge and sun deck onboard the SS Sudan

Unfortunately, when I came on board the boat was at full occupancy. So, I couldn’t check out any of the cabins for myself.

But, from seeing the Death on the Nile movie and the Steam Ship Sudan website; they all look vintage boutique!

Some of the rooms have brass and antique gold wicker bed frames, and luxe deco bedding and interiors.

There are 5 suites and 18 cabins onboard the Sudan. You can even stay in the Agatha Christie Suite and a cabin dedicated to her famous detective, Hercule Poirot.

As we wound our way up the winding wooden staircase and over the wooden floorboards, it felt surreal. To walk along this steamer which I had seen on TV was just spectacular.

We made our way up to the lounge deck on top of the boat and found a beautiful place to pass the time and watch the world go by.

There were lounge chairs, sunbeds, tables to play chess. It really looked like the ideal place to relax with a drink and see the sights of the Nile.

I could only imagine what it would be like to catch the sunset from here. Ah, I can only dream!

A look inside the SS Sudan engine room

I always love poking my nose in to see the captain’s quarters of a ship. There’s something so interesting about modern sailing.

There’s a chair, navigation equipment and lots of shiny buttons which I didn’t understand (but so tempting to push)! Also, a phone to make calls.

You won’t find the stereotypical ships wheel like in the olden days now, although you can find it outside for show.

The engine room was also fascinating. Unlike modern cruise ships, steamships work with an engine that makes a chugging sound. You can watch it spin in the engine room.

My guide told me that it’s quite loud at night, so you can hear it while you sleep. I’m quite a light sleeper myself. But, if I was on this ship I think it would be worth it!

How much is the Agatha Christie Nile Cruise?

The Steam Ship Sudan runs two types of cruises. What’s great about these is they stop at more sites than most of the regular Nile Cruises including Dendera and Abydos (which usually cost extra);

Both cruises have the same rates;

You can also rent this boat out for special occasions. The captain told me about a murder mystery evening that was held onboard. I think I would die of excitement if I got to attend!

Do you love Agatha Christie?

If you’re gaga about Agatha Christie too and wanted to read more about her travels in Egypt. I have a few posts that I think you might love all about the hotels that she stayed in here on her travels.

You can read about the Old Winter Palace in Luxor and discover all the Agatha Christie secrets you can find within the Old Cataract Hotel in Aswan.

All aboard the Steam Ship Sudan

If you’re a fan of the novel or movie Death on the Nile and the queen of crime herself, then a trip on the Steam Ship Sudan is the perfect choice for you.

Don’t miss out on travelling back in time with the Agatha Christie Nile Cruise and come aboard the Steam Ship Sudan; the oldest ship still actively running on the Nile.

Read more of my Egypt articles

My top travel tips for Egypt

Why you need to visit the West Desert in Egypt

The most Instagrammable places in Egypt

My guide to the Valley of the Kings

Things to do in Luxor

Things to do in Aswan

Top places to visit in Luxor at night

The perfect guide for Abu Simbel

My survival guide for the pyramids

Top things to do in Cairo

Why you NEED to visit Alexandria

Top tips for riding a hot air balloon in Luxor

Hello! I have just returned from Egypt where I was thrilled to spend 5 days cruising down the Nile on the SS Sudan! Your article and photos truly captured the joy of boarding and experiencing this legendary vessel! Thank you!

Hi Jim, oh wow! That's amazing that you got to sail down the Nile on the SS Sudan. It truly is an amazing ship! I'm glad you had a good time. I miss Egypt so much. Thank you. Sophie x

1984 i motored down to Aswan on a then 100 odd year gaff rig schooner Boston storm built in Boston UK as a pilot cutter....at Luxor we tied up alongside the paddle steamer for a few weeks before making our way down to komombo and Aswan .

Hi Thomas! Wow, that sounds like such an adventure. I bet travelling to Egypt must have been so different back then! I would have loved to have seen it before all the attractions were overloaded with security checks haha :) Sounds like you made some memories of a lifetime! Thanks for sharing, Sophie x

Hey Sophie, thank you very much indeed, that helps! By the way, I just want to say thank you for keeping this blog. I really love the way you write about each place you visit, especially how you cover the small details that other bloggers tend to overlook. I also share your passion for visiting places where authors have left their mark and hotels with history and character. Egypt is on my bucketlist and given that Covid 19 has put a stop to travelling for now, your blog is very much a way for me to live vicariously as well as build up my research for a seamless trip.

Hi there, ah thank you! I do try to write in detail as I like to plan trips and find those were the questions I Was asking! So I put them in the post as I thought it could be useful :) Oh I hope you can visit Egypt, it really is the most magical place! Fingers crossed for you! Sophie x

This is on my bucket list! Thank you for sharing, do you know if it is true that the SS Sudan does not sail in Dec?

Hi CM, not to my knowledge! December is peak season in Egypt due to nice weather so I would say they definitely sail that month. I’ll have a look and get back to you! Sophie x

Heya exceptional website! Does running a blog similar to this take a lot of work? I've no understanding of computer programming but I had been hoping to start my own blog soon. Anyhow, if you have any suggestions or tips for new blog owners please share. I know this is off subject however I just needed to ask. Appreciate it!

Hi Alisa, I have a blog post here that could help you. Sophie x

Hey there! I'm a UK based solo female travel blogger. I love writing about the weird, wonderful, magical, and historical on my blog. I want to inspire you & turn your wildest travel dreams into a reality through my travel guides and tips!